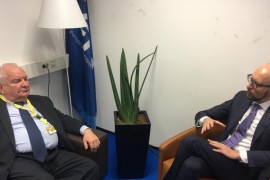 On Wednesday, November 20, Arseniy Yatsenyuk, Prime Minister of Ukraine in 2014-2016, the leader of People's Front party, is participating the European People's Party Congress in Zagreb.

The first one among the number of the scheduled Arseniy Yatsenyuk’s meetings in the Croatian capital was with EPP President Joseph Dole.

In his Facebook post Arseniy Yatsenyuk noted that the EPP is one of the most important political associations in Europe.

The leader of the People’s Front Party expresses his gratitude to the EPP President for the many years of solid support to Ukraine.

"My main thesis was: support Ukraine despite any current difficulties and political challenges," Arseniy Yatsenyuk stressed.

In June 2019, the Political Assembly of the European People's Party decided to support the intention of the People’s Front Political Party to acquire observer status.