Arseniy Yatsenyuk in Lviv: We all have to draw conclusions from the Budapest memorandum. I ask the President not to come from Normandy with a new “Budapest”

Arseniy Yatsenyuk in Lviv: We all have to draw conclusions from the Budapest memorandum. I ask the President not to come from Normandy with a new “Budapest” 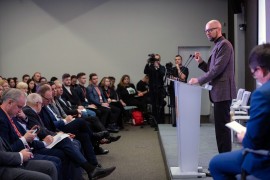 Today is 25 years since the signing of the Budapest Memorandum. We all have to draw conclusions from the fate of this document: "I ask the President of Ukraine to draw these conclusions and not come from Normandy with a new "Budapest,” Prime Minister of Ukraine in 2014-2016, the leader of the People's Front party Arseniy Yatsenyuk said on December 5, in his opening speech to the Young Leaders Security Forum in Lviv.

Arseniy Yatsenyuk said that during the Normandy meeting, "the priority for the Prresident is to take a clear, unambiguous, state-oriented, and independent stance": "A stance that will allow no one to interpret it in their own way, neither in German, nor in English, Russian, or French. A stance that is outlined in Ukrainian, and has the only clear interpretation. It’s important to show strength. This is how all negotiations begin. ”

"This is some kind of a know-how - to call elections democratic when they are held under the «protection» of the Russian military," he added.

Arseniy Yatsenyuk also stressed that the fundamental idea of the Minsk agreements was a full implementation of ceasefire: “This has not happened yet. The ceasefire must be implemented, the troops must be disengaged, and all the Russian armed formations must be withdrawn from the territory of Ukraine. This is beyond discussion. "

Regarding the exchange of the prisoners, he emphasized: “Ukrainian captives are hostages. And those who are here are Russian bandits. These definitions have to be correctly articulated. Sentsov has been released in exchange for Tsemakh, but Sentsov is a captive and a hero, while Tsemsakh is an international criminal. One mustn’t confuse these definitions. "

The People's Front leader also stressed, that the beginning of the regaining control over the state border is of major importance, whether the Special Monitoring Mission or the OSCE or the peacekeeping mission are to be involved: “When the border is open, when Russians feel at home on Ukrainian sovereign territory,  we will never restore territorial integrity”.

"It is also critical that the President emphasizes on returning Crimea and stresses on the illegal annexation of Crimea, according to the United Nations General Assembly resolution," Arseniy Yatsenyuk said.

Young Leaders Security Forum in Lviv which is being held by Arseniy Yatsenyuk "Open Ukraine" Foundation is the first regional meeting that is a sequel of the Youth Security Forum held traditionally in Kyiv. The theme of the Forum is "International Coalition to Support Ukraine: How to Protect and Strengthen Solidarity".

The forum takes place a day before the meeting of leaders of Ukraine, France, Germany and Russia, scheduled for December 9, 2019 in Paris. The focus of the conversation is Russian aggression against Ukraine.